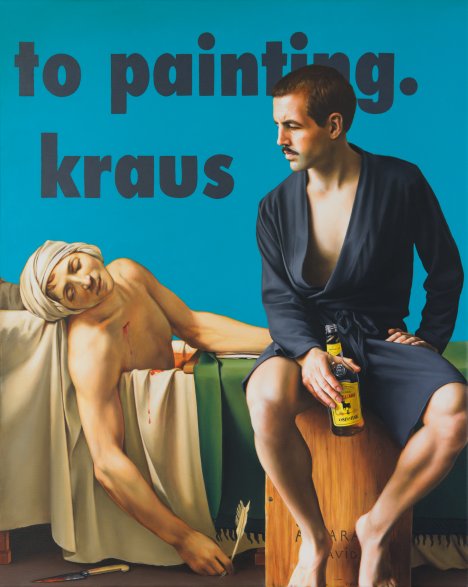 In his lucid work “to painting”, Jonathan Kraus takes up the painting “The Death of Marat” by Jacques-Louis David and subtly criticizes the activism and ideologies of his and our time. The short revolutionary, scientist and doctor Jean-Paul Marat suffered from a skin disease and often sat in the bathtub for relief. Marat's demagogic newspaper "Ami du Peuple" was a mouthpiece for the sans-culottes, called for the execution of "enemies of the people" and triggered the September massacre. On July 13, 1793, he was stabbed to death by activist Charlotte Corday. Jacques-Louis David (1748 - 1825), a French classicist history painter, worked first for the king, then as a revolutionary painter and then for Napoleon. David took an active part in the revolution and voted for the king's execution. David painted his picture “The Death of Marat” immediately after the assassination attempt and dedicated it to the man who was stabbed to death. Jonathan Kraus (* 1989, studied in Dresden with Ralf Kerbach and in Leipzig with Annette Schröter) contrasts David's politicizing dedication with his own version. The lettering “to painting. kraus ”is a statement against political activism and for the essentials - in this case painting. Kraus brings himself into the image of the activist David and positions himself as the observer of the dead activist Marat. His features reflect thoughtfulness and distance. Technically, Kraus' painting can compete with David's and is much more reflective in terms of content.