Our gallery was founded in Erfurt in 1996 and is now a fixed point in the German art world. It represents both established and upcoming positions. The programmatical focus lies on graduates from Central German art schools, but we also represent artists from the US and Japan. The decisive selection criterion is artistic quality.

Professional gallery work includes art historical, journalistic and art market related aspects. We publish numerous catalogs with well-known publishers, cooperate regularly with German and European museums and exhibit at international art fairs. The aim is to establish our artists in the long term. Since 2005 we are running a branch in Frankfurt am Main, Fahrgasse, where numerous galleries have settled in the immediate vicinity of the Museum of Modern Art, the Schirn and the Kunstverein and a lively and radiant art location has developed.

The Erfurt parent company is located in the Kleine Arche 1A, in the building of a former printing works, where the radical democratic "Weltbühne" was produced until 1933. It is a three-minute walk to the Kunsthalle, Angermuseum and Krönbacken are only a little further away.

We cordially invite you to become part of our world and to subscribe to our newsletter. We look forward to your visit at openings, concerts and events, but just as easily during opening hours. If you sign in, there will be time for a conversation -  hardly anything is more stimulating than a constructive exchange. 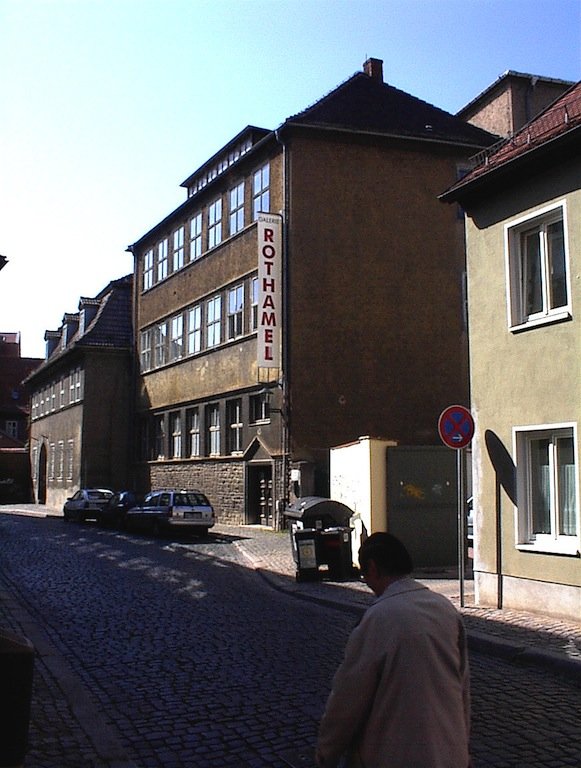 That’s where it all began: The building of the former printery "Fortschritt" in the street Kleine Arche 1 in Erfurt.

After just three weeks of preparation the gallery moved into the premises in the 1st floor and opened the first exhibition on november 21th in 1996. The response to it was amazing – 500 people came and danced until the early hours. A private gallery for contemporary art was a novelty in Thuringia. Our mission is to support artists, to push them, to publish them, bring them into museums and important privat collections and also to show them on major art fairs. 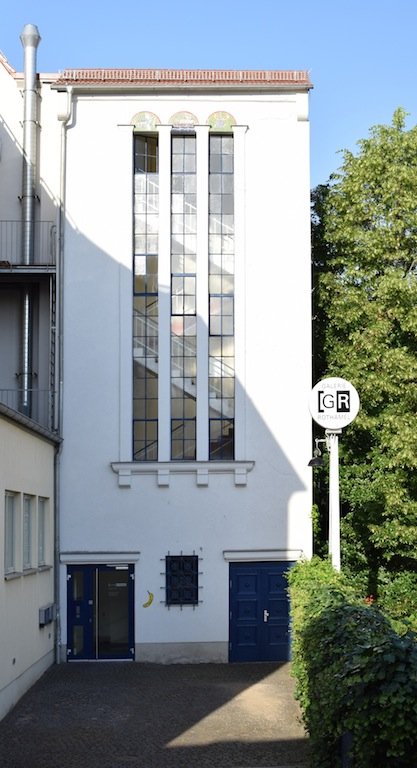 As an art historian Rothamel had come into contact with the art market several times. His most spectacular experience was a  auction of contemporary art in Russia in 1994. The „German Academic Exchange Service“ had entrusted him with a study of the opaque local art market. Rothamel ventured an experiment. Without further ado he invited the important contemporary artists of Saint Petersburg, published a catalog and had the exhibited works auctioned off. The echo was impressive, the city had not experienced auctions of contemporary art since 1917. The auction provided a lot of insights for the research project. But the most important insight was that practice is much more exciting than theory.

Rothamel found suitable rooms in a former printery in the town centre of Erfurt. High ceilings, large windows to the northeast, industrial parquet and glass masterpieces from the twenties. If you wanted to get in, you had to climb up a dark staircase and ring a massive steel door. For weeks relatives and friends helped to polish, paint and assembel. Invitation cards were sent out - and it started. In 1997 not less than 12 exhibitions took place. At the beginning the focus of the gallery work was on art from Thuringia. Harald Reiner Gratz, Gerd Mackensen, Katrin Heesch and Katrin Gassmann as well as Carsten Weitzmann, Uta Hünniger and Matthias Geitel exhibited. Some of them stayed in the following years, others retired. Contrary to the trend of the nineties, it was possible to establish a thriving scene for contemporary art in Erfurt.

In 1997 Rothamel got to know the artist Moritz Götze from Halle. A friendship developed between the artist and the gallery owner, beyond the business. 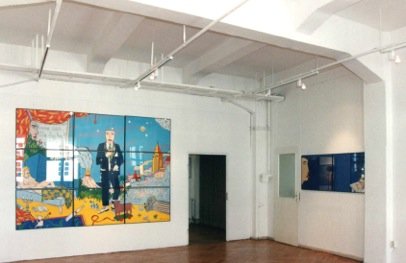 Another cooperation started in 1997. On the mediation of Carsten Weitzmann, Rothamel got to know the Erfurt based photographer Hans-Christian Schink. Schink studied at the Academy of Visual Arts (Graphic and book art) in Leipzig and developed, based on the Düsseldorf School, a succinct own imagery. His photograph puts reunion of the seperated parts of Germany in a very own light. Very strong, frontal and only in cloudy weather he photographed terraced houses, the new traffic routes and highways, factories and warehouses. Schink made high demands on himself and his coperation partners and and kept the gallery culture on the go. Hans-Christian Schink is one of the best living Thuringian artists. His works play an independent role in international contemporary photography and Schink works are found in important art collections worldwide. 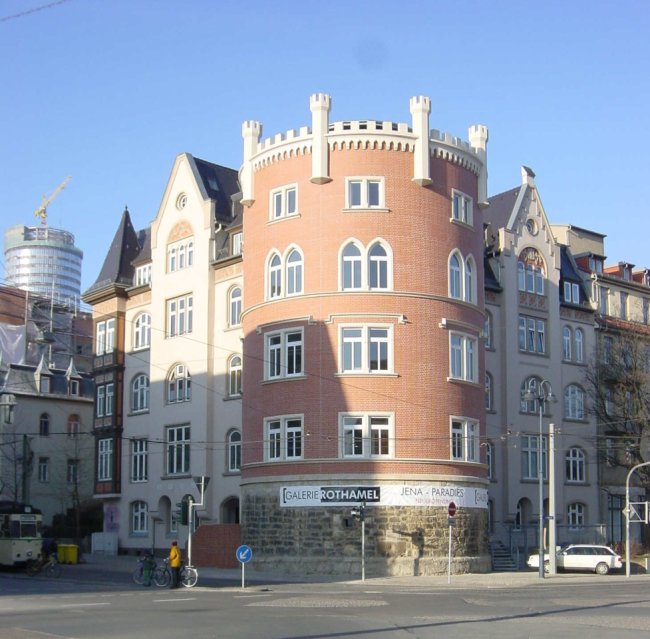 Four years later, the first branch office of temporary art gallery originated in the newly built „Red Tower“ in Jena. The former fortified tower was used as a residential building in the 19th century and should be used as a restaurant after a renovation. A bad accident during the renovation moves the investor to change the usage plan: For one and a half year the tower offered us a great opportunity for a splending presentation of our gallery. The early months would be terrific, then the crash of the new market was the end of the Jena high-tech stocks. The local collectors stayed away. We moved out. Nevertheless, the tower was still used as a exhibition place by the "Jenaer Kunstverein" (Art society of Jena).

In June 2002 the gallery moved on a house further, „Kleine Arche“ 1 A. The new rooms were (and are) fantastic and subsequently provided with a skylight. 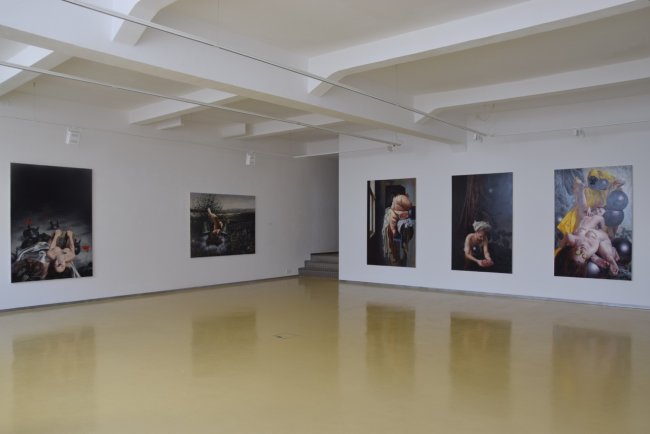 Artwork by Nguyen Xuan Huy in the Gallery in Erfurt

In 2005 we opened our showroom at Fahrgasse 17 in Frankfurt. After a loving and elaborative conversion, the first gallery of the Fahrgassen-type was born: the economic miracle architecture of the late forties shone in new splendor, was sensitively revised and adapted to the requirements of a modern gallery. The original character with skylight, canopy, brass window frame, bakelite door pull and grid frame over the radiators has been preserved. Friends, neighbors, co-worker Johanna Pahnke and especially all-rounder René from AGH helped for a perfect start. Around the same time, other colleagues launched new projects in Fahrgasse. Over the following years, more galleries settled. Some disappeared again (without trace or spectacular), but today the street between the river Main and Berliner street houses eight galleries and is a hotspot of the Frankfurt art scene.

In the course of the gallery's history, we participated at 51 art fairs - in Basel, Berlin, Bologna, Brussels, Dresden, Frankfurt, Karlsruhe, Cologne, London, Luxembourg, Lyon, Vilnius, Vienna and Zurich. Some art fairs were very successful, others were recorded under the chapter „nice experience". They all had the invigorating stress factor and many interesting encounters with collectors, artists, museum people, art transporters and fair makers in common.