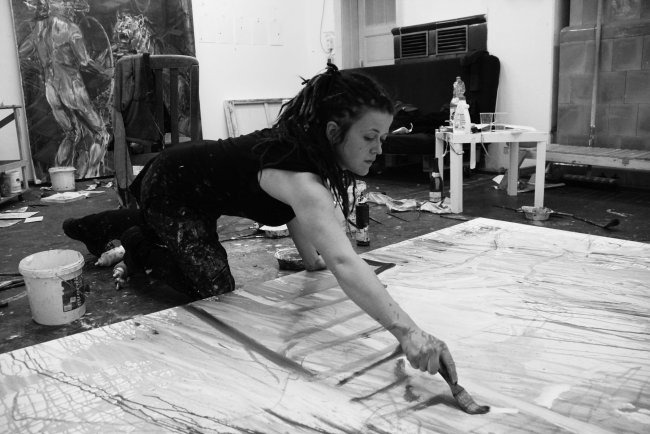 Undine Bandelin's paintings lead us into a world in which the boundaries between humans and the animal kingdom, reality and dream are abolished. In her pictures she explores the human archetype, his border areas, fears and drives and his existential search.

"It is my concern to design and assign roles, to withdraw them and to swap them. I put group leaders, outsiders, instigators, seducers, regents, rebels and unwanted followers in the limelight. With the most varied of figures appearing, the picture space becomes a stage space . What one was, is, can be: overdrafts, transformations, expansions from germs, wishes and memories. The figures appear from a new perspective, in a different light, in dark downsides and absurd reflections. "

Undine Bandelin (* 1980) studied painting at the Burg Giebichenstein Halle art college. In 2012 the artist received a scholarship from the Kunststiftung Sachsen-Anhalt, in 2013 a working scholarship from the Künstlerhaus Meinersen and in 2014 a scholarship from the Landesverband Lippe as well as the art prize of the city of Limburg. It has been in the collection of the Museum of Fine Arts in Leipzig since 2018. In 2019 she won the Alexander Tutsek Foundation award for the Pilchuck Glas School in Seattle and in 2021 the Juntels Artist Residency in Hangzhou.