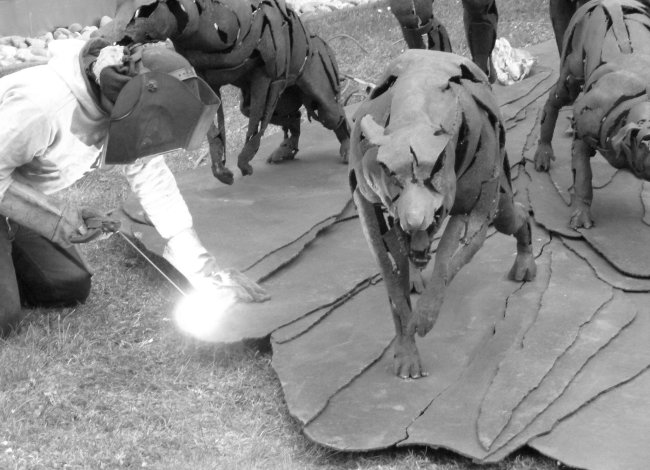 Between human and animal figures, Dana Meyer recognizes a "body relationship" that dissolves the boundaries to the animal kingdom. The artist writes: "In allegories and metaphors people recognize themselves as animals with their peculiarities, natures and archetypes. The interplay and simultaneity of experiences in these visual worlds is more immediate. The figure thus falls back on something felt and an individual reminiscence and thus becomes something familiar in its depicted character”.

Dana Meyer forges her sculptures freehand from steel. She manages without the usual intermediate steps of working with smaller models. This virtuoso and bold way of working requires an extraordinary spatial imagination as well as a high level of craftsmanship.

The artist welds individual forged segments into figures. Free spaces and open volumes are just as important as the steel parts. All together form the sculpture and its perceptible force field.

Dana Meyer (*1982) studied sculpture at the Burg Giebichenstein Art College in Halle, where she received her diploma of fine arts in 2011 and completed as an master student by 2014. In 2011 she received the art award of the Saalesparkasse savings bank, in 2012 scholarships from the Kloster Bergesche Foundation and the Kunststiftung Sachsen-Anhalt, in 2014 together with Undine Bandelin the art award of the city of Limburg, in 2015 the graphic design prize of the savings bank Nordhausen, in 2018 a stipend from the state of Saxony-Anhalt and in 2019 the Alexander Tutsek Foundation scholarship for the Pilchuck Glas School in Seattle (USA).