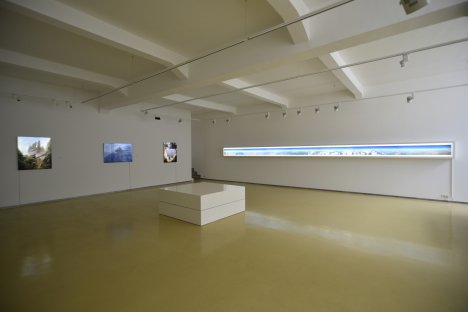 The art works of Hiroyuki Masuyama (1968 in Tsukuba / Japan) outwit time and space. Masuyama photographes parks in which all seasons reign at the same time, he makes summer flowers sprout next to icy ponds, he circumnavigates the world in a few moments and shows us all the stars at once - not only those about us, but also those beneath us. For him, time travelling is more than just a fictional possibility. His journeys often lead him into the epoch of European romanticism.

An extensive series of works by Hiroyuki Masuyama are devoted to Caspar David Friedrich (1774-1840), the most important German landscape painter of that era. He recreates Friedrich's paintings anew by using thousands of detail photographs.
Suddenly, Friedrich's freely imagined scenarios achieve the credibility of photographic images. Phantasies of the 19th century, considered with the eyes of the twenty-first - an exciting journey through time begins. Seeing the past in the bright light of the present, without the patina of time - the works of Hiroyuki Masuyama make it possible.

We cordially invite you and your friends to the opening with Hiroyuki Masuyama.
Please join us on Saturday, 29 April at 8 pm.
Intro: Lila Bungalow Solo Set

Enclosed you find a link to a youtube video which allows you to have a preview of our show.
https://www.youtube.com/watch?v=MaMABkR-xpk
As well there was a nice feature on ZDF TV channel:
https://www.zdf.de/nachrichten/heute-journal/fotografien-von-hiroyuki-masuyama-100.html