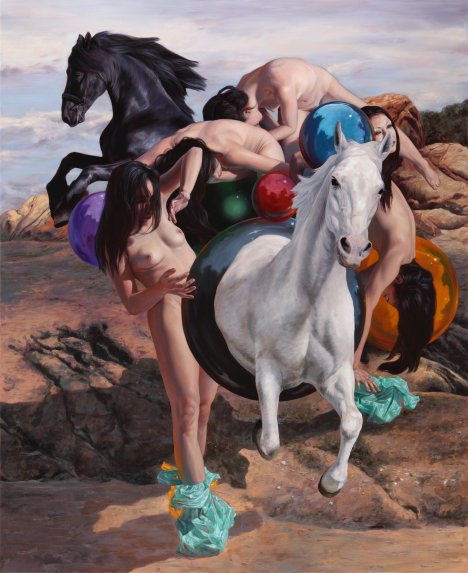 Almost two hundred years after Théodore Géricault, Nguyen Xuan Huy resumes the theme of the raft of the Medusa and creates a provocative parable. Nguyen does not fall into the all too benevolent pose of compassion with shipwrecked ones; he instead portrays a society that has lost it’s values, flirts with barbarism (and  is likely to get it).
Nguyen Xuan Huy was born in Hanoi in 1976. He studied at the College of Architecture, Hanoi, at the Ecole des Beaux Arts in Bordeaux, and in 2003 he earned his diploma in Painting at Giebichenstein Castle Art Academy. He worked at the Vermont Studio Center and is laureate of international art awards.

Nguyen's painting is highly political. The superficial eroticism of his paintings is the carrier of his social criticism and torpedoes any political correctness. So bitter, so frivolous, so clever, perfect, and against the grain good art must be.

We cordially invite you and your friends to the opening with Nguyen Xuan Huy.
Please join us on Friday, 24 March at 7 pm.