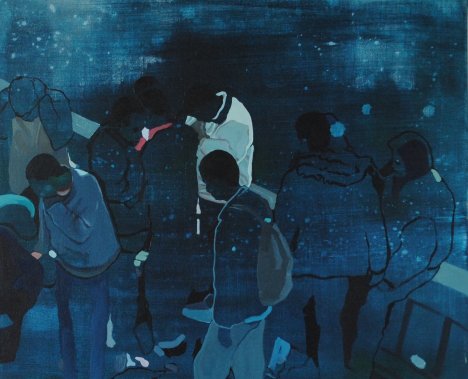 Nabil El Makhloufi was born in 1973 in Fès, Morocco. He attended the Rabat Art School, worked as an art teacher and studied from 2001 to 2008 at the Academy of Visual Arts Leipzig. After graduation Annette Schröter invited him into her master class.

In the years since 2005, El Makhloufi developed a synthesis of contemporary Moroccon art and the approach of the Leipzig School painting. In 2010, his extraordinary artistic talent was recognised for the first time: at the Dak'Art Biennale, where El Makhloufi received the Thamgidi prize. Then in 2014, he was awarded the Paris Stipend, a four months fellowship at the Cité des Arts in Paris.

In Nabil El Makhloufi's painting, every line and every surface is pursuing it’s own significant mission. Yet, El Makhloufi paintings tell of stories full of predictions, predictions that have turned into actual events. In the years before the "Arab Spring" his art anticipated the uprisings of North Africa and the Middle East. His "crowds" and "crossings" came into being reality from 2008, already illustrating the exodus of the area.