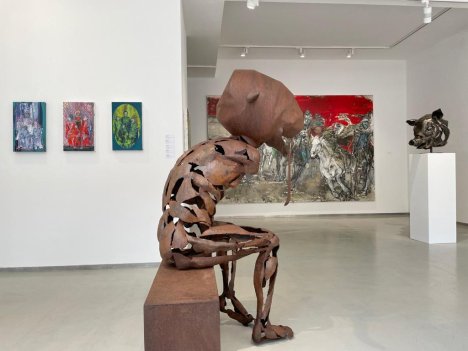 "It is my concern to design and assign roles, to withdraw and swap them again. I stage group leaders, outsiders, instigators, seducers, regents, rebels and unwanted followers. With the most varied of figures appearing, the picture space becomes a stage space . What one was, is, can be: overdrafts, transformations, expansions from germs, wishes and memories. The figures appear from a new perspective, in a different light, in dark downsides and absurd reflections. "

Undine Bandelin (* 1980) studied painting at the Burg Giebichenstein Halle art college. In 2012 the artist received a scholarship from the Kunststiftung Sachsen-Anhalt, in 2013 a working scholarship from the Künstlerhaus Meinersen and in 2014 a scholarship from the Landesverband Lippe as well as the art prize of the city of Limburg. It has been in the collection of the Museum of Fine Arts in Leipzig since 2018. In 2019 she won the Alexander Tutsek Foundation award for the Pilchuck Glas School in Seattle and in 2021 the Juntels Artist Residency in Hangzhou. 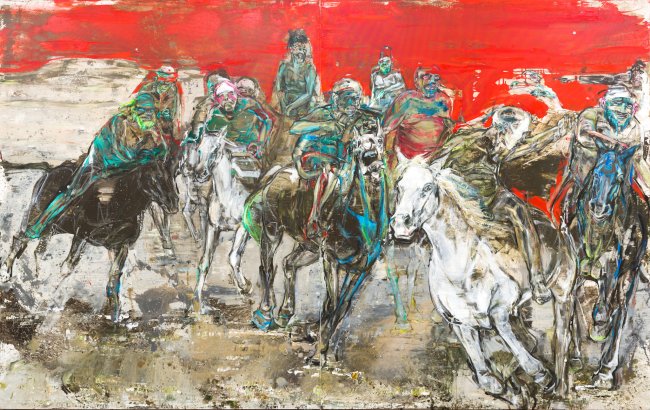 Dana Meyer's sculptures are characterized by high internal tension, powerful dynamics and unique precision. Meyer's works depict animals and people, individually, in groups, sometimes in fragments. The sculptures are realistic, expressive and haunting in their message.

“In allegories and metaphors people recognize themselves as animals with their peculiarities, natures and archetypes. The intertwining and simultaneity of experiences in these pictorial worlds is more immediate. The figure draws on what is felt and individual reminiscences and thus becomes something familiar in its portrayed character, ”the artist formulates.

Dana Meyer forges, drives and welds her sculptures freehand from steel. This virtuoso as well as bold way of working includes an extraordinary spatial imagination and a high level of craftsmanship.

Dana Meyer (* 1982) studied sculpture at the Burg Giebichenstein Halle School of Art, where she obtained her diploma in 2011 and completed a master's degree in 2014. In 2011 she received the Saalesparkasse Art Prize, 2012 scholarships from the Bergesche Foundation and the Sachsen-Anhalt Art Foundation, 2014 the City of Limburg Art Prize together with Undine Bandelin, the KSP Nordhausen Graphics Prize in 2015, a scholarship from the State of Saxony-Anhalt in 2018 and the Award from the Alexander Tutsek Foundation for the Pilchuck Glass School in Seattle (USA).