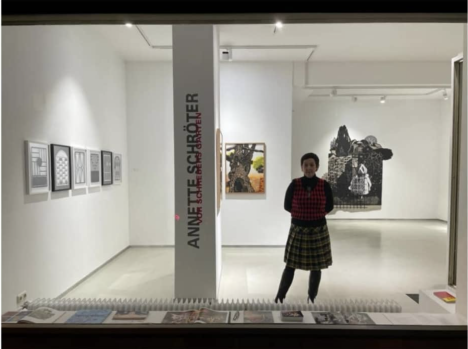 BEFORE SCHREBERS GARDEN FOR ERASMUS

Summer and autumn 2020 will be remembered: No trips overseas, few visits from family and friends. Planned exhibitions did not take place almost without exception. Instead, bike tours! Almost endlessly and often in the vicinity of the city, no further than 30 to 50 kilometers from the place of residence.

The cycle paths often led along allotment gardens. The little doors of the respective parcels looked back to their own childhood. Their renewed appearance, now more than fifty years later, seemed all too familiar, as we had literally saved them unnoticed and had simply forgotten them in the meantime. The design of these metal gates is interesting and more than diverse. The oldest seemed to be the most beautiful - plentifully overgrown and covered with rust.

They were manufactured from the fifties to the eighties of the 20th century when there were no hardware stores in eastern Germany. Today's uniformity was not yet given - what was more important was the imagination and individuality of the respective locksmith. The circle, square and rectangle, triangle and of course the line as a connecting element dominated.

The arrangement of the pattern was extremely strict and yet individual. Sometimes these garden doors seem like descendants of Cubist or Suprematist pictorial inventions. The formal, sometimes very strict means used followed - certainly completely unconsciously - the pictorial dictum: the simplest solution is always the best!

The craftsmen of that time succeeded in creating completely timeless and at the same time modern formations in metal.

Annette Schröter (* 1956 in Meißen) studied at the HGB Leipzig with Bernhard Heisig and moved to Hamburg in 1985. In 1997 she returned to Leipzig with her husband Erasmus Schröter and has held a professorship for painting and graphics at the HGB since 2006.

She said goodbye to the medium of painting around 2005 and from then on devoted herself to paper cutting. This technology received remarkable impulses from Annette Schröter. The first thing you notice is the format, which has grown into a monumental dimension. Annette Schröter works with patterns and contours, spaces, textures and blurring. But it also shows the real strengths of the paper cut, the linear, the ornament. Our reality, graffiti on decaying industrial architecture, enigmatic buildings in residential areas or plant-covered chain-link fences move into the center of her artistic interest.

How perfectly Annette Schröter masters her medium could be seen in the Kunsthalle Hamburg, where she showed paper cuts together with William Kentridge, Olaf Nicolai and Kara Walker. In 2018, Annette Schröter and her husband, the photographer Erasmus Schröter (+2021), exhibited at the Museum of Fine Arts in Leipzig.