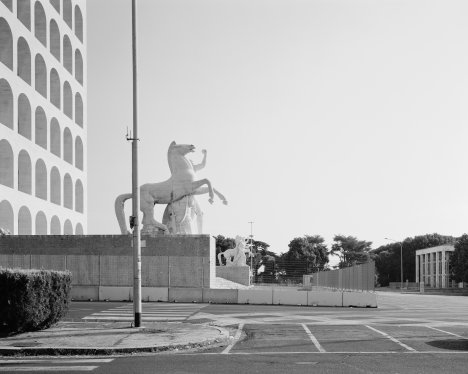 We cordially invite you and your friends to our artist's conversation with Hans-Christian Schink and Luminita Sabau. Please join us on Wednesday, July 1st at 7 p.m.

After spending a year at the Villa Massimo in Rome, Hans-Christian Schink returned to Germany with two new series of work, the first of which we will be presenting on the 9th of May.
Esposizione Universale di Roma is the name of the 1938 erected district in the South of Rome, the district Schink presents and explores in his latest series. In E.U.R (as the locals call the quarter) it was Mussolini’s will that in 1942 the quarter should hold a global exhibition under the theme of ‘Olimpiade Civilta’. An architectural landmark that stands so poignantly from this period and theme is the Palazzo della Civilta del Lavoro, a landmark named after its ancient predecessor, the Colosseo Quadrato.
But with Italy entering into World War 2 and with the end of the fascist government in 1943, this led to the temporary suspension of the E.U.R exhibition project. In the 1960’s Italy experienced an economic miracle with wealth flowing into the state, this wealth and with the new plans for hosting the Summer Olympics, Italy experienced a spurring change in urban design.
The modernist architecture of the time is a " dehistorisation" (Ulrich Pfammatter), of what is firmly rooted in the former Italian society. This phenomenon associated with the stage-like artificiality of the neighbourhood is an important aspect in Michelangelo Antonioni's L'Eclisse film. Federico Fellini once also displayed  the E.U.R. in "Boccaccio '70".
Hans-Christian Schink approaches the phenomenon of the EUR from new angles. He resists the lure of the monumental optical axes, grandiose central perspectives and the strict play of light and shade - well to a small degree. Hans extends the vanishing points to several meters, displaying sculptures from the back and draws attention to banalities. Through his autonomous perspective, he breaks the intended gesticulations from the power of the place by removing the people and the vehicles; instead he shifts the atmosphere into the surreal.