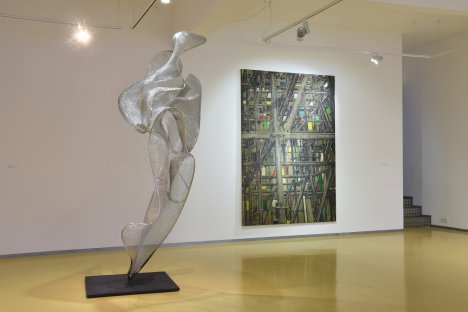 The journey of discovery starts and ends in the room. In the confrontation with this concept the artists develops multifaceted abstract representations.

Axel Anklam works with light’s effects and the atmosphere of the surrounding area - depending on the position of the observer, his sculptures change due to the transparent or opaque material expression. At the same time they are imbued with inner harmony. With the help of consonance studies of Pythagoras, Anklam brought his works to sound: Per monochord he translated pitches into track lengths, and incorporated these in his structures.

Both artists depart from the principles of perfect abstraction and establish a connection to the reality of our world and thus also to the viewer. They use this approach in order to explore the different echelons and parallel worlds in their art space.

Axel Anklam was born in 1971. He first trained as a blacksmith in which he finished at the age of 22. He then worked for the Foundation of Prussian Palaces and Gardens as a restorer. He then received a scholarship for a student trip to the European Centre for the Conservation of Venice. In 1998 he began to study Sculpturing at the Art Academy Burg Giebichenstein. He joined, in 2002, Tony Cragg's class at the University of Arts Berlin, and finished his studies in 2004. In 2010 he went on a visiting professorship for the State Academy of Fine Arts in Stuttgart. In 2013 he participated in the Biennale di Venezia. In the same year he won two extensive art tenders of the Federal Ministry of Education and Research. Anklam's works can be seen in museums, renowned collections and in public spaces. The artist lives and works in Berlin and Bad Freienwalde.

Jan Muche was born in 1975. After training as a lithographer, Muche began to study painting at the University of Arts in Berlin, where he graduated in 2006 as a Master student of KH Hödicke. In addition to his artistic ventures, from international solo shows to group exhibitions, in 2008 he decided to finish a doctorate: He received his first teaching position at the Art Academy Berlin-Weissensee , followed by a guest professorship of painting at the CDK in Hangzhou / China in 2011, which was in cooperation with the University of the Arts / Berlin. Again in 2011, Muche received the position of lectureship in Berlin-Weissensee. Jan Muche lives and works in Berlin.