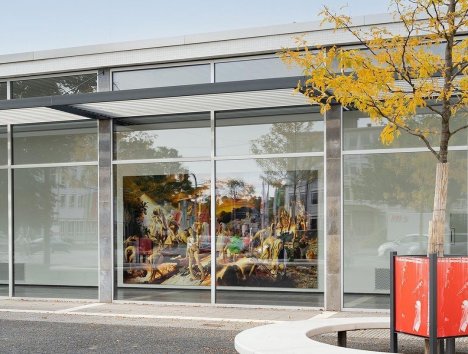 Nguyen Xuan Huy presents his epochal composition "Une journée Horizontal" in the Kunsthalle Darmstadt. It is a work presentation - only this one painting will be on display. What it is all about - in terms of content and technology. Nguyen Xuan Huy Une journée horizontal Work presentation 04.09.2021 - 30.01.2022 The composition is clearly based on Théodore Géricault's Raft of the Medusa (1819) in the Louvre in Paris. Nguyen's stage space is, however, a bit wider in proportion. Instead of one collapsed pyramid, you can see two of them. They arrange the compact tableau of 28 figures, young women and men, which to describe in detail here would lead too far. Just this much: each one seems to represent a world of its own. Each appears to have been forced into a pose, half remotely controlled, half narcissus-like, mostly self-absorbed. They all look European, but the latter may be due to the models with which the artist is used to working. At the same time, the pyramidal shape also plays with the views of the tombs of Giza, which are deeply anchored in cultural memory. A sphinx surrounded by ivy in front of the right edge of the picture literally triggers this association. But neither water nor sand, but a red and white something prevails. Embers? Does the sky just look like fire or does real fire rise in it? Vegetation, rocks, an artistic footbridge, a wooden house still under construction that could also be read as a boat or an improvised changing room, all of this leaves no indication of the scene of the event. Unlike Géricault, it's not about life or death. The seesaw on the swing is reminiscent of the pendulum on a clock. As a well-known symbol of vanitas, the fly by the Sphinx underscores the allegory of time, which one is certainly dealing with here. Compared to the figures and other animals, a lioness and two roseate spoonbills, it is oversized. A new species created through interference with nature? Or does the fly require the large format, as if the painter had seen it sitting on a reduced draft of his picture and enlarged it with this as a background? The confusing standards, the placelessness, the unclear reference to time contrasts with a feeling of harmlessness that this particular travel company conveys. Finally, different images flow together in a vision that straightens heaven and hell. León clutter