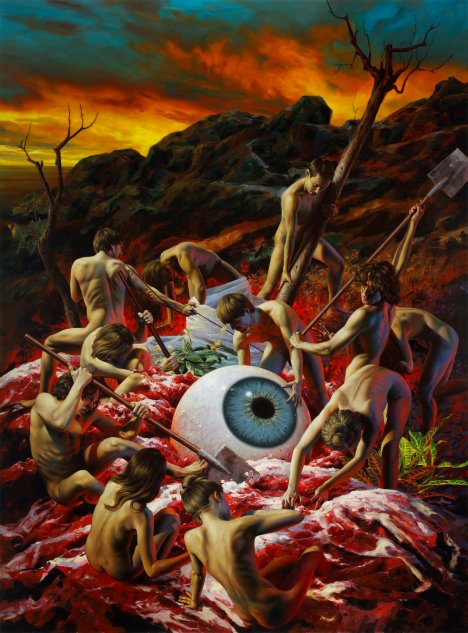 Graceful, naked female bodies, dancing or floating in erotic poses through unreal worlds. With dreamy, blissfully smiling or ecstatic faces, agile young people loll around on cushions, sometimes alone, sometimes as a group in atmospherically illuminated landscape scenes. The oil paintings by Nguyen Xuan Huy, painted in the manner of the old masters, are immediately overwhelming in their beauty. And they are disturbing - because the deceptive appearance quickly reveals itself and changes the mood: twisted or crippled limbs are noticed and threatening details such as machine guns, chicken wings or socialist symbols lurk everywhere. His identity is directly linked to the Vietnam War as the fundamental trauma of his origins. The consequences of the defoliant Agent Orange used by the US Army, which to this day causes numerous deformities, are just as central to his works as the socialist ideology with which he grew up in the communist country. Since 1994, Nguyen Xuan Huy has had his permanent residence in Germany and especially the perspective from the outside enabled him to artistically deal with the propaganda which, as he says, made him believe in a naive worldview of good and bad for a long time. In addition, there is an interested look in the other direction - at the tradition of Europe. Western art history inspired the painter at an early age, as can be seen in many quotes and allusions as well as his realistic, sensual way of depicting the human body. The mixing of these very different backgrounds led Nguyen Xuan Huy to see the many images in his head, despite all opposites to visually intertwine in large-scale fictions. Various set pieces from reality, ambiguous and puzzling moments of action and eerie, often dodgy atmospheres create a surreal world in which the logic of everyday life is undermined. While the usual boundaries are broken, dream and nightmare merge symbiotically. With Nguyen Xuan Huy, the Jena Art Collection presents fascinatingly sensual painting, which provokes emotional and intellectual reactions and demonstrates how the attractive and the repulsive can stimulate each other.